We have just returned from this fascinating trip to Central Europe. It was rather a whirlwind, arriving in Bratislava late on Saturday night, with all the excitement of three countries to dip into ahead of us. We found the city absolutely captivating as we wandered around the next morning; full of charm and contrast. A city so welcoming to us on our very short visit and one which clearly is undergoing change and rejuvenation. We loved the Savage Garden, the brutalist architecture of the university and the dynamic concrete construct unfolding space around it. We’d love to go back with more time to sketch and visit our favourite Old Slovak Pub again .. and to visit Slovakia in more depth. The East in particular.

On to Vienna and we completely immersed ourselves in some of the best art galleries in the world; The Leopold, the Belvedere and the Kunsthistorisches museum. So fantastic to see so much of the Viennese Secessionists in situ, the Schieles, Klimts, Kokoschkas etc (unfortunately many of the Gerstls had been removed in preparation for a major exhibition in Frankfurt, which we are sorely tempted by). We so enjoyed the Messerschmitt busts in the Belvedere and The Kunst was simply a treasure trove of Bruegals, Titian, Vermeer, Arcimboldo, Raphael, Rubens etc etc etc…. Vienna’s supreme elegance and overwhelming culture had us on our hooves constantly. We filled our tanks with wall to wall art, but still didn’t feel that we had penetrated the city really and have left much to return to.

We then caught the train, as we had done from Bratislava to Vienna a few days before. The landscape, particularly in the Czech Republic, was captivating and although we had planned to sketch, we found ourselves transfixed by the passing scene. The train line passed flat snowy agricultural expanses and then forged deep into a stunning gorge between Brno and Blatsko; tracing the course of the partially frozen river  Svitava.

Prague was the gem awaiting us at the other end and we were instantly hooked by its exquisite architectural beauty, it’s rich tapestry of history and culture and deep intrigue. Walking the narrow alleyways in the Old Town, just as Kafka would have done and the thousands of people over the centuries had done before that, threw us into a timeless bubble. We sat and drank beer in the wonderfully bohemian Cafe Montmartre situated in one such street, frequented by writers and artists and now us, as Mr Kirin sat and sketched while I drained my pilsner. We visited Golden Lane, famed for its alchemists and a rather eclectic list of residents, the Jewish Quarter, the castle and the slightly disturbing Kafka Museum, which rather cleverly induced a feeling of some sort of existential crisis by the end, with intensely dark and narrow spaces, fractured film footage, potent music and oddly arranged exhibits.

In short, an amazing trip! We have collected all sorts of material for our collages, which we like to do following such an adventure… maps, tickets, discarded flyers … and we will post the results soon, as well as some of our collaborative and individual sketches. 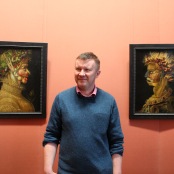