This piece is the largest work on paper that we have worked on to date. It’s 120x100cm; a thrilling scale, full of potential for gripping mark making and contrasts of bold gestures and detailed intricacy.

We have been totally immersed in responding emerging images in this piece and feel that the resulting painting is highly complex and can be read in a variety of ways. 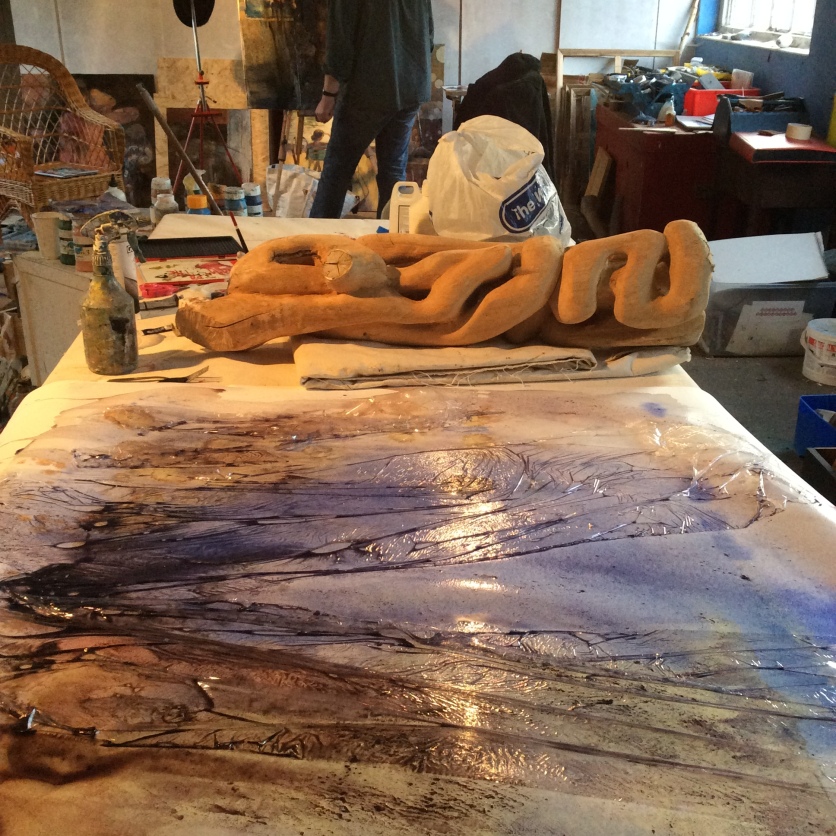 The subject matter appeared half way through the process, as we identified the Japanese legend of Princess Tamatori and the Ryōjin (sea dragon) in the marks.

The narrative developed in response to the tale of the princess’s heroic recovery of a treasured pearl stolen by the dragon king, Ryōjin during a storm on its way to Japan in the inlet of Fusazaki. She vowed to help recover the stolen pearl that belonged to her family and after many failed attempts she was finally successful when the dragon and grotesque creatures guarding it were lulled to sleep by music. Upon reclaiming the treasure, she came under attack by the awakening sea creatures. She cut open her breast to place the pearl inside for safekeeping and escaped in the water clouded by her own blood. She died from the resulting wound but is revered for her selfless act of sacrifice for her husband Fuhito and their son. 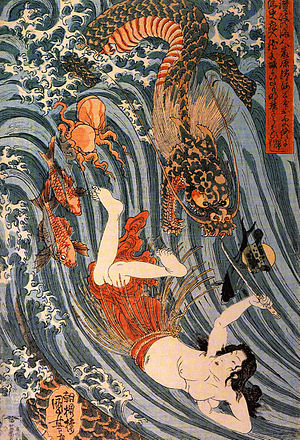 A woodblock depicting the legend of Tamatori by Utagawa Kuniyoshi

This painting forms part of a series of work inspired by our recent trip to Japan and our deep interest in classical mythology. These will be exhibited in June 2018 at Ashdown Gallery.

Excited to be participating in this event on the 2nd and final weekend of next month.By appointment only between 10am-4pm or by special arrangement to enable Covid safety and guaranteed car parking space.To book a half hour visiting slot or make any enquiry please leave a message via thekirins.com #collaborativeart #suffolkopenstudios #artistsstudios #artistsoninstagram #suffolklife #thekirins
‘Wren Leaves’
‘Clutch’
‘Spring Blossoms’
We are delighted that we now have an unlimited run of Giclee prints available of
Small Bee on a white Buddleia study available via http://www.etsy.com/uk/shop/TheKirinsArtShop #honeybee #buddleia #collaborativeart #blossom #artistsoninstagram #seasons